Request Appointment
Home Education What is bruxism and is it related to TMJ/TMD?

What is bruxism and is it related to TMJ/TMD? 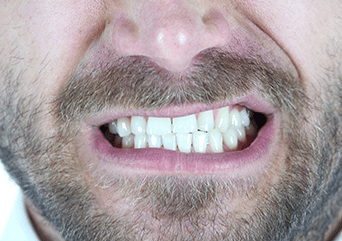 Bruxism is a medical term that refers to tooth grinding that occurs at night and day or night time clenching.  The tooth grinding that occurs at night iscalled sleep bruxism and it is actually classified as a sleep movement disorder. This is further divided into primary sleep bruxism where there is no obvious cause, and secondary sleep bruxism which is related to causes such as medical conditions like depression, sleep disorders, benign tumours and medications / recreational drugs such as Ritalin, MDMA and cocaine.

Primary sleep bruxism was thought to be related to psychosocial (stress / anxiety) factors but a meta analysis carried our in 2009 of 45 papers shows no relation to sleep bruxism but there is a relation to day time clenching. (Manfredini, D. and F. Lobbezoo, Role of psychosocial factors in the etiology of bruxism. Journal of orofacial pain, 2009. 23(2): p. 153-166.)

SO IN SUMMARY, SLEEP BRUXISM IS ACTUALLY CAUSED BY OUR BRAINS !

As mentioned above daytime clenching is more related to stress and anxiety so this is something we can work on using techniques such as meditation, cognitive behavioural therapy, mindfulness and where possible better life choices. Clenching can be related to pain in other areas of the body as well and so a holistic health approach is required.

It was once thought that bruxism was related to an incorrect bite. This concept is no longer valid. (Etiology of bruxism: morphological, pathophysiological and psychological factors (PMID:11385781)).

So what’s the big deal about bruxism?

During normal eating our teeth barely touch, as there is food between the teeth and the forces exerted on the masticatory system ( teeth, joints, muscle etc) is only 5-10kgs. Studies have shown that during night grinding / clenching the force exerted on the system is up to 150kgs. Furthermore during normal function are teeth only contact for 20-25 minutes a day, where as during sleep bruxism the teeth can actually contact for up to 40 minutes a day !

This repetitive clenching / grinding can cause micro trauma, i.e. too much repetitive force for the physiological capacity for a normal jaw joint. This can cause joint degeneration and also disc displacement within the joint, ie clicking which can then be associated with pain for some. Bruxism can also make the muscles more fatigued and more susceptible to pain or referring trigger points. For others the excessive force can even lead to loose teeth. It has been suggested that the weakest link suffers, be it the jaw joints, muscles, teeth or the gums from the excessive forces. (Metha et al. Different Effects of Nocturnal Parafunction on the Masticatory System: The Weak Link Theory. Journal of Craniomandicular Practice.OCT 2000, Vol 18. No.4)

For some their TMJ / TMD symptoms can often be worse first thing in the morning, indicating some sort of night time grinding / clenching.  Jaw pain and tension type headaches in the morning are common with sleep bruxism. As discussed above sometimes the night time bruxism may be due to sleep disordered breathing and it is important to diagnose this because using a “ flat plane splint” at night which is traditionally the most prescribed splint by most dentist’s can make the sleep disordered breathing worse.  (Int J Proshodontist 2004,17:447-453) This is why some may have a flat plane splint made and find they actually suffer from more bruxism, or their sleep is worse, or they actually wake in more pain as the “ flat plane splint” has simply made the driver for the bruxism worse.

When sleep disordered breathing is noted a mandibular advancement splint constructed to a neuromuscular position is recommended.

For others where TMD symptoms become worse as the day progresses a day time orthotic that mitigates the clenching forces and maintains decompression of the TMJs is necessary for successful treatment. This is particularly true if the inflammation in the TMJs is causing descending postural adaptation / forward head posture / cranial dysfunction but thats to be discussed another time…..